In this article, I’m going to share with you a different way to think about nutrition and training. I’ll also discuss why most people make a very simple, yet very fixable, mistake when trying to lose body fat.

I’ll cover why so many people feel like they’re mostly doing the right things when it comes to eating and training, yet they ultimately never see the changes in body composition they’re working so hard for.

I’ll start by discussing the obesity epidemic before I jump into the world of fitness. This is because the average person in the gym that wants to lose 10-lbs has a lot more in common with the overweight person that needs to lose 30-lbs than you might think.

Along the way, I’m also going to share a personal example of how I recently shed some extra pounds while increasing strength at the same time, using a far different approach than most.

Once again, the answer to this age-old problem comes back to understanding the relationship between energy and recovery and how we’re hardwired for survival above all else. From this perspective, it’s easy to see why the combination of high-intensity exercise and dieting inevitably fails…

Most Americans say they are eating healthy, but are they really?

In a 2016 poll conducted by Truven Health Analytics, thousands of Americans were asked one simple question: “How healthy would you consider your eating habits to be?”

The results? According to the study, more than 75% of respondents ranked their overall diets somewhere between “good” and “excellent.”

At the same time, research also shows that across the last 16 years, more and more people are joining gyms and increasing their overall activity. You can see this steady rise in gym memberships in the graph below.

Total number of memberships at fitness centers/health clubs in the U.S. from 2000 to 2016 (in millions) In short, more people than ever are working out and saying they’re eating healthy. Given these statistics, it’s easy to think that Americans are generally living healthy lives by eating well and staying active.

There’s only one problem with this idea: despite increased activity levels and allegedly healthy diets, America as a country is still getting fatter and fatter. Take a look at the graph below to see what I mean. From 1997-2015, the number of people with gym memberships has nearly doubled. Over the same period of time, the percentage of people classified as obese has increased by close to 50%!

If everyone is eating better and exercising more than ever before, why is the country still getting fatter as a whole? After all, most diet experts have said our obesity epidemic is largely caused by people moving too little and eating too much.

Is activity really the problem?

To figure out what’s going on here, we have to start by looking at some of the most basic assumptions…

While most diet and fitness gurus unanimously agree that physical inactivity is a huge contributor to our obesity epidemic, the research paints an entirely different picture.

Population data comparing the US, Norway and Japan, clearly demonstrates that more activity does not necessarily lead to less obesity and body fat, as we’ve been led to believe.

As you can see, the U.S. has a more active population than either Norway or Japan, yet our obesity levels are significantly higher. While roughly 60% of the Japanese population is considered inactive, the obesity rate in Japan is only 5% compared to our 33%. This means that the Japanese are roughly 1/3rd less active than the US, yet their obesity rates are over 600% lower. If inactivity is one of the major drivers of obesity, how can the obesity rates in the US be so much higher than other countries that have less active populations?

To try to solve this mystery, we need to dig deeper and see how activity relates to body composition and weight loss. To do this, we can look at what happens in the real world when people are put into three different training programs with varying doses of exercise per week.

Based on total energy expenditure measured throughout the week and self-reported caloric intake, researchers calculated a predicted weight loss (how much weight an individual should be theoretically lose given the simple calories in, calories out formula). At the end of the study, they compared this prediction to how much weight was actually lost between the different groups.

Most people would assume that the group that did the most exercise would lose the most weight, but that wasn’t the case at all. 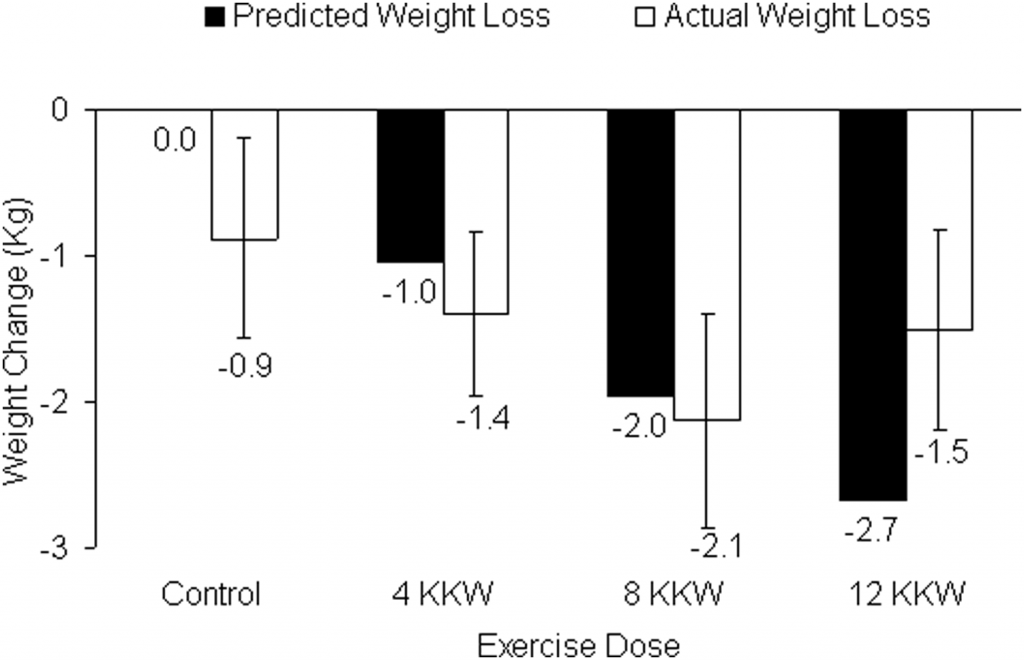 The brain, dopamine and energy homeostasis – the missing link to understanding fat loss

When most people hear the word dopamine, they think of a “pleasure” or “reward” chemical—something that spikes when eating chocolate, or doing other things we derive pleasure from, like working out. While it’s true that dopamine is related to these types of activities, the reality is that it’s involved in much more than pleasure or reward.

Instead, dopamine is about energy. More specifically, dopamine’s largest and most important role is to drive behaviors that maintain energy homeostasis in the body.

Energy homeostasis is the regulation of both energy expenditure and energy intake—an obviously critical component to ensuring we always have the energy we need to stay alive.

In order to regulate energy homeostasis, dopamine is involved in driving behaviors related to both moving (energy expenditure) and eating (energy intake). In other words, dopamine fuels both our desire to train and to eat. Again, this can be traced back to evolutionary biology. Without an intense drive to move and eat— i.e. the motivation that compels us to search for food and then eat it—we wouldn’t have lasted long as a species.

While dopamine’s role in driving moving and eating behaviors is crucial to survival, it can also sabotage our weight loss goals when we try too hard to move more and eat less. As I discussed in my previous article on why our obsession with high-intensity has failed us all, moving too much can quickly lead to a recovery debt.

When you simultaneously restrict calories while pushing your body to the max in the gym day in and day out, this process is accelerated even more and the brain quickly fights back.

The recovery debt and its connection to body weight

To quickly recap, a recovery debt is what happens when you spend so much energy being physically active and dealing with the stress of life that there’s not enough energy left over to rebuild your body to make it stronger and more fit.

Remember, your metabolism can only produce so much energy each day. That means that your brain is forced to prioritize where to distribute this limited resource.

Any time you put yourself in a caloric deficit, you force your body to start breaking down its own tissues for energy. Of course, you hope it will only burn stored fat, but in reality, it’ll also break down stored sugar (glycogen), and if you create a large enough deficit, it’ll start breaking down muscle too.

What it all comes down to is this: when you restrict calories and pile on high-intensity training to drop body fat, you make it much easier to get yourself into a recovery debt. When this happens, it sets off a cascade of events in the body that work together to influence your behavior, primarily via changes in dopamine function.

Although not all the processes that drive dopamine and behavior are entirely well understood, more and more research points to a variety of consequences that occur when you combine high-intensity training, the stress of life, and a low-calorie diet:

We’re driven to eat more, whether we realize it or not

The best example of what these interconnected hormonal pathways invariably lead to is a great piece of research where 16 men and women with normal body weights were asked to perform a short, low-intensity workout. After the workout, the participants were asked to estimate how many calories they had just burned. They were then taken to a buffet and told to do their best to eat the equivalent number of calories they believed they burned in the workout.

In other words, if they thought they had burned 300 calories during their workout, their goal at the buffet was to eat 300 calories to refuel. The researchers wanted to find out how accurately people could gauge their energy expenditure and subsequent intake after exercise.

The results, summarized in the chart below, are nothing short of eye-opening. The “calories estimated” bar shows that participants believed their workout burned 800 calories. The reality: they only burned 200.

At the same time, when taken to the buffet, the participants ate close to 600 calories. This was roughly 3 times the amount of calories they had actually burned in the workout!

“CONCLUSION: These results suggest that normal weight individuals overestimate EE [energy expenditure] during exercise by 3-4 folds. Further, when asked to precisely compensate for exercise EE with food intake, the resulting energy intake is still 2 to 3 folds greater than the measured EE of exercise.”

Translation: people in the study were terrible at gauging how many calories they burned and even worse at estimating how many they ate. This is a perfect example of how our biology can work against us.

The hormonal interactions that drive us to eat more than we’re aware of come down to one simple thing: the brain is biologically hardwired to fight back when a lot of energy is expended through activity and life stress and not enough is coming in from food. This is the work of our most primal survival instincts, yet so many people try to fight against it. Even worse, they think it’s a fight they can win.

They go to the gym and use the workout as a challenge to burn as many calories as they can. The more calories they burn, the more fat they’ll lose…or so they believe. They take pride in eating fewer and fewer carbs and making sure their foods are low fat.

The funny thing is that pretty much everybody has tried this approach at one point and failed to lose weight—and yet the next time they feel the need to shed some pounds, they try the exact same approach. They do this over and over again.

The name of the diet might change, but the tactics are ultimately the same: move as much as possible while eating the fewest calories tolerable. The reality is that this isn’t a recipe for fat loss, it’s a recipe for recovery debt and all the problems that entails.

This is why many people eat well and train hard during the week, only to rationalize their weekend binges on big dinners and desserts as a reward for their hard work. Sound familiar?

It’s also why 75% of the population thinks they are eating healthy, yet 1/3rd of the country is obese and another 1/3rd is overweight. People might be eating healthier foods, but they’re still eating too much of them. Too many “cheat meals” turn into cheat weekends that sabotage any progress made during the week.

The bottom line: the more you try to fight against the body, the faster you’re ultimately going to lose the battle.

To help you learn more about how to stop fighting against your own biology and start using a recovery-driven approach to nutrition that makes burning fat easier than ever, I’ve put together a personal case study. After a recent trip to Europe and too much good food, I decided it was time to get back to work.

Download the case study below to see how I use a recovery-driven approach in my own diet and training.